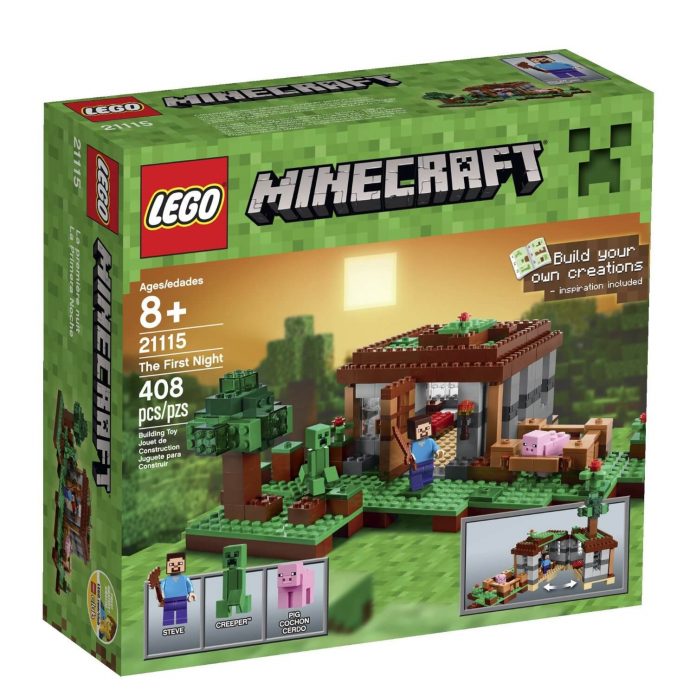 Yesterday, Legosecrets from the LEGO Wikia site posted a couple of images of two of the upcoming LEGO Minecraft Minifigure Scale sets. Those sets were The Cave (21113) and The Farm (2111). Now, he is back with even more images of these upcoming sets. This time Legosecrets has revealed the very first images of The First Night (21115) & The Mine (21118). Each of these set includes iconic scenes from that the players of the Minecraft game will recognize along with a couple of mobs and some nice accessories.

The First Night looks like a very simple set to me. It seems to be mainly composed out of green base plates and a reasonable amount of 2×2 bricks. The build quality doesn’t really blow my mind and it doesn’t make me feel the need to buy it. I personally think that the minifigures are what add the value to the set. Speaking of minifigures, included in this set is a Steve minifigure with the new head mold and a brick-built creeper and sheep.

At the other end of the spectrum, we have The Mine (21118). Now this is what I call a good LEGO Minecraft set! Unlike the other MC sets we’ve seen, this set features a lot of things that make it worth buying such as the mobs included and the overall build. This set seems like a fun build that young builders will enjoy once it’s complete. It features a railway for a minecart, ladders for Steve, support beams, and a lot of cool accessories such as the TNT and the weapons. As for mobs, we get a Zombie, a Skeleton, and a brick-built Creeper and Spider. Personally, from what I have seen so far, this is one of the best LEGO Minecraft minifig scale sets.

What do you think about these set? Do you like any of them? Let us know in the comments below! If you haven’t already, check out our new article of Hulk smashing the casino to get a good laugh.